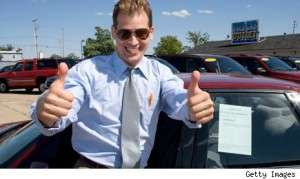 Working as a Car Salesman

If you are interested in working as a car salesman, you should be prepared to sell either new or used cars or both.

You could also sell motorbikes and vans or

A key to success in this career is to study the industry as if you were studying for a Masters degree.

You have to learn and know all that you need to know to succeed in it.

Jim Ziegler, a top performing automobile salesman shares this tip and other very valuable keys to success as a car salesman in the video below titled:

How to Work a Car Deal.

He emphasizes that you don’t need to be deceitful to sell cars and make huge profit as some salespeople do, such way does not lead to success, rather, upholding integrity will pave the way for you to succeed.

Another key to success he shares is that if you have decided to work as a car salesman, you must start seeing yourself as a manager and not a salesman.

Seeing yourself as a manager will enable you to come up with great processes that will produce huge sales result.

This video is loaded with information and inspiration to all sales people, particularly those selling cars, as Jim reveals how he achieved phenomenal success working in the automobile sales industry.