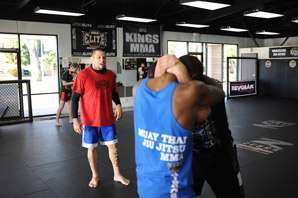 You can become a certified BJJ instructor with the right training and certification.

How to become a Certified BJJ Instructor

Before you think of becoming a certified BJJ instructor, you have to attend one of the major Schools of BJJ, some of which will allow black belts to become instructors with or with no certification and training.

In most cases, purple or brown belts instruct students of low level.

Are you interested in becoming a BJJ instructor? If yes, then this post will be helpful to you; it shows you what you need to know and do to become one.

BJJ stands for ‘Brazilian Jiu-Jitsu’, which was formerly known as Gracie Jiu-Jitsu in Brazil, and developed by Helio Gracie.

In BJJ, there is less usage of physical power, but more focus on speed, flexibility and leveraging of the body.

During the first UFC in 1993, Royce Gracie, Helio’s son, out of his 180 lbs conquered the no-hold-barred tournament, in which all martial arts were presented, introducing the Brazilian Jiu-Jitsu into the martial art system.

How to Obtain Certification

Certification is the pride of every BJJ instructor. With certification, there is a better chance of meeting employment opportunities than without it.

Employers want to be sure that they entrust their business to qualified instructors, and the only way they can do that is by looking for certified BJJ instructors.

Here are some certification programs you can enroll in:

At the International Brazilian Jiu Jitsu Federation, students may begin to instruct at lower levels, for them to gain experience as instructors.

To instruct black belt students, you must attain the rank of second degree black belt.

The need for a black belt certification is necessary, as regards a situation whereby there are enough black belts to instruct, and purple and brown belts act as supervisors.

Registration and taking of courses are online-based, but there is a person-to-person training held in their headquarters in California.

During this training session in California, all trip and accommodation expenses are at your own cost, and then you can become a certified Gracie Academy instructor.

For long-term training and rank advancement at Gracie University, you need the subscription programs starting at $20 per month, which gives full access to the curriculum for a small monthly fee.

There is also a one-time premium price from $8 to $14 per class, if you are interested in some segment of the curriculum.

There are over six hundred (600) techniques to master in order for you to be considered for promotion to black belt.

Perfecting the thirty six techniques that are covered in the Gracie Combative course is the first step, and then you can work on your blue belt, then purple, and then black.

Approximately, it takes eight to twelve months to earn the Gracie Combative belt, and then another six to twelve months for blue belt, then three to four years for each belt after blue. To earn black belt, it will take you eight to fourteen years.

Jiu Jitsu students at the USA Jiu Jitsu Instruction Certification Course are to pass the certification test before they can be certified as instructors.

The student who has successfully completed this certification training course will get a certificate and also an instructor stripe accompanying the belt.

Training is necessary for BJJ instructors as this will increase their confidence, experience, and competence.

A well-trained instructor can never be compared to a non-trained one. That’s just the reason there is need for formal training for those intending to become certified BJJ instructors.

At the Mississauga Brazilian Jiu-Jitsu, BJJ allows smaller and weaker ones to defend themselves against bigger and stronger contestants by applying leverage, speed, and timing.

As they take their opponent to the ground, BJJ practitioners concentrate more on dominating their rival by either a choke hold or joint lock.

During classes, there is first of all a warming up, after which a stretching routine follows, and finally flexibility exercises, which includes stable stretching and more energetic exercises.

Anaerobic drills follows immediately the body is warmed up and stretched, which increases body explosiveness, endurance, and speed through exercises that improve your movements on the ground by aiming at your takedowns, positioning, guard passing, and escapes. These are likely to decrease your energy.

There is also demonstration of techniques, each technique followed by a drill made to improve the memory of your muscle.

At last, the classes are ended by a rolling session called ‘Sparring’, in which all the demonstrated techniques are put into practice.
Beginners are not meant to participate in the sparring session until they have reached a good level of understanding of the rudiments.
The price for Mississauga Brazilian Jiu-Jitsu is based on negotiation, and after registration you will need BJJ Kimono (GI) for BJJ classes, shorts and rash guard for MMA/ NO GI Classes and enough water.

Duties and responsibilities of BJJ instructors vary according to job status. Without these duties, one can hardly identify his roles as a BJJ instructor.

Below are some of the tasks and roles of BJJ instructors:

Anyone can become a certified Brazilian Jiu-Jitsu instructor if they know what is required and the training and certification programs to take.

This post provides the steps you need to take to begin a career and succeed as a BJJ instructor.

Did you find this post useful in becoming a certified Brazilian Jiu-Jitsu instructor? We would love to know what you think about this article, please leave a comment in the box below.